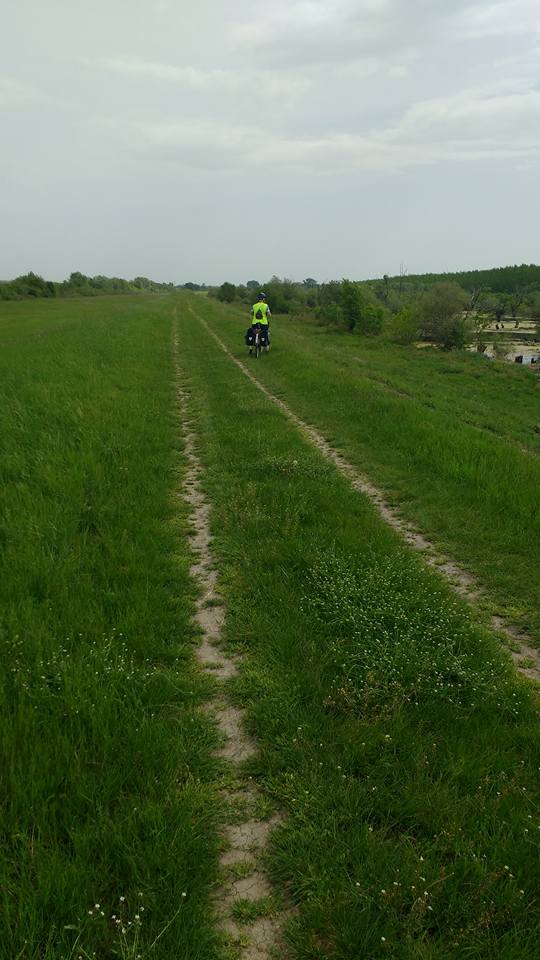 I was flattening a decent headwind, and looked over my shoulder to check Caroline was still on my wheel. Evidently I wobbled a tiny bit as I heard a yelp of surprise. Followed by: “Norm wouldn’t do that. Norm is steady“. So, Normand Howison, this is to let you know, you are the Gold Standard of cycling partners. Am I hurt? No… no really, not a bit… sniff.

To be fair, this followed a difficult and slightly fractious session. Running the gauntlet of Belgrade traffic, dicing with death on the Pancevo Bridge, and plodding as the official path crossed grassy fields, where diggers twice dumped loads of earth right across the path in front of us.

Things looked up. The road got quieter and faster, and eventually we were flying along the final KMs towards the ferry port at Stara Palanka. Not before a final grassy section though, alongside a tributary with Cuckoo, Egrets and Herons all displaying. Lovely spot after the coaches left. Leaving on the first ferry in the morning. 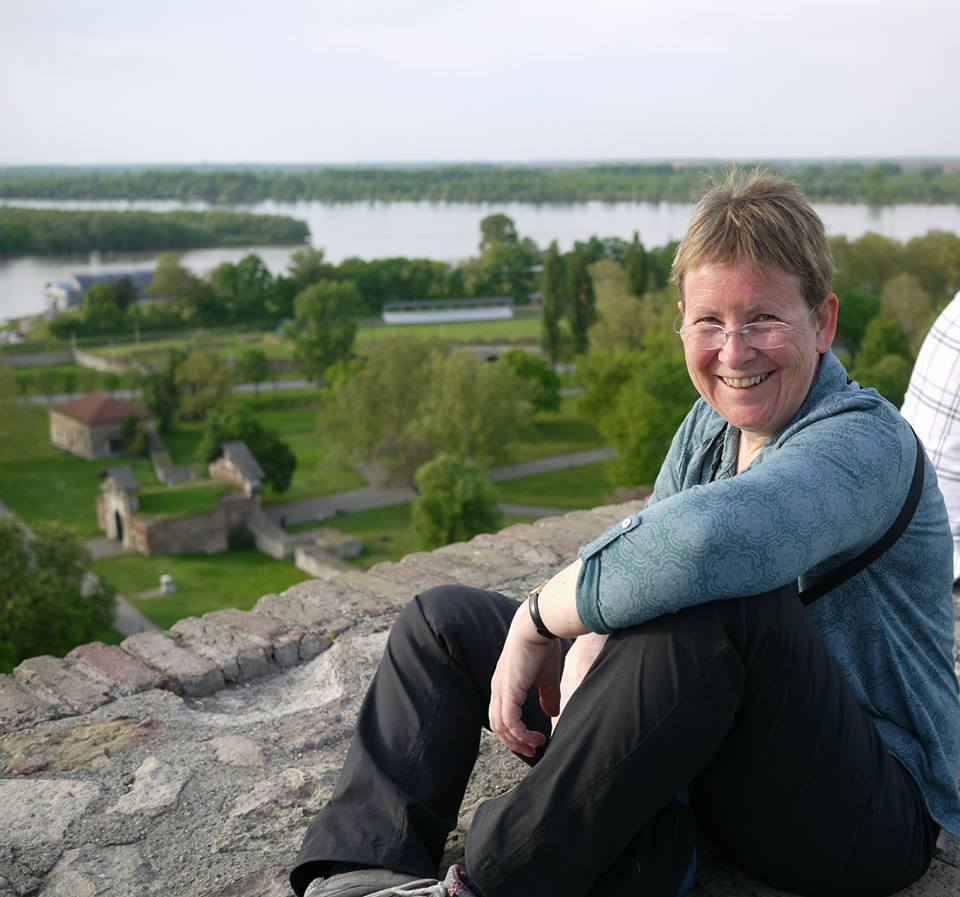 The dreamy atmosphere of Pension Dunavsko Gnezdo soon gave way to blue clouds of diesel smoke as we pedalled through the Belgrade suburbs alongside buses and trucks. Not a pleasant section. But shortly before reaching the Sava Bridge we turned onto a quiet road, through an upmarket area, and drank lemonade at a nice cafe overlooking the Danube.

We planned a half-day ride so we’d have a little time to see Belgrade. Went the Nikola Tesla museum, a Serb who pioneered AC electrical systems, and, in the slightly inflated Serbian version, also invented the Internet and no doubt electric vehicles too. Quick sightseeing walk via Parliament and Republic Square to Kalemegdan, a fortress and public park, and a nice place to look out over Danube and Sava.

We planned to check out two different veggie restaurants, but as we walked towards the first, a featureless building, a pony-tailed man leaned out of a window and shouted in English: “Are you vegetarians looking for a vegetarian restaurant?”. We must have V tattooed on our foreheads. 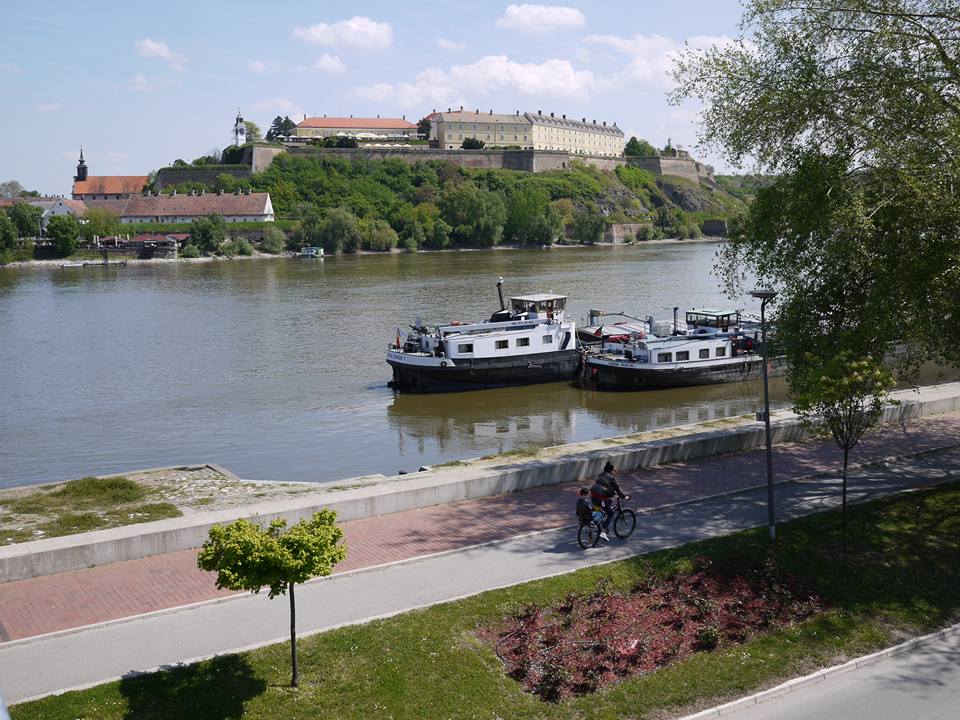 Serbians are a very friendly lot, and today we had two good chats with octogenarians in French. The first told me he had served in the army in Paris for four years. The second had studied in Belgium for two years in the 1960s and spoke delightfully clear French that I had no difficulty understanding. But when I responded in best schoolboy French, he gave me that same blank look I once got from a French mechanic whom I told “I have a prawn in my tyre”. (Crevette / crevaison… easy mistake don’t you think?)

Cycling day had the usual mix of rough back roads, stressful whizzy highways and occasional super-smooth cycle paths.
Disappointed to pass quickly through Novi Sad, Serbia’s second city, but at least we stopped for lunch there, looking across the Danube to the fort at Petrovaradin. The bridge here has been destroyed numerous times in wars, right up to 1999, when the allies bombed it (and Novi Sad) in reprisal for Kosovan conflict. 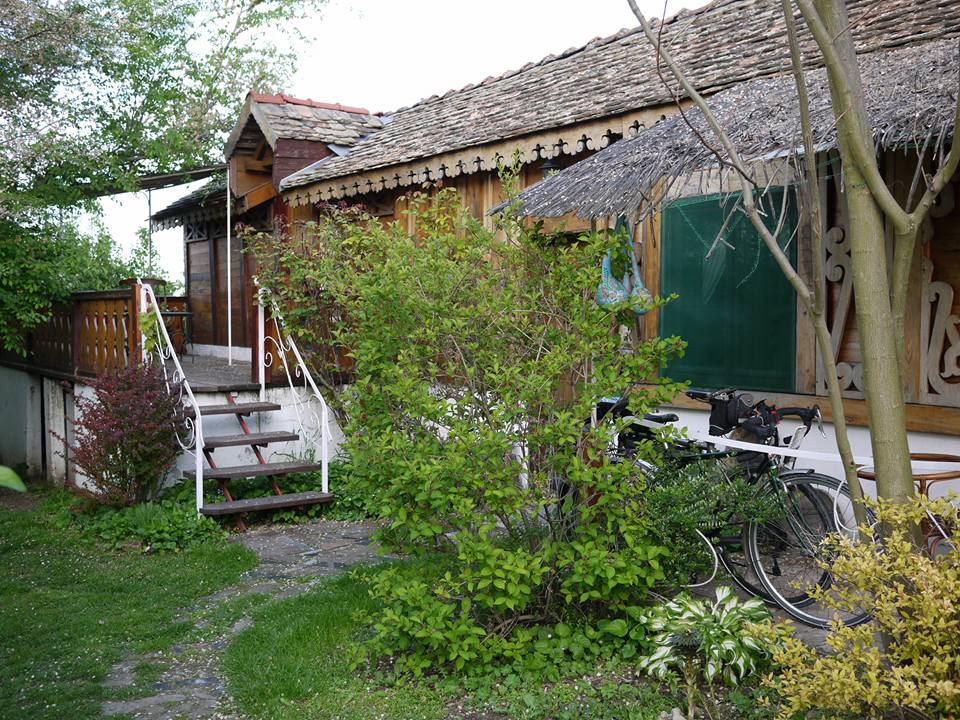 After Petrovaradin, a 5.6% climb for 4km, the stiffest of the trip. Of course, I only know the gradient from Strava, naturally it was sign-posted 8%.

We are staying in a rustic cabin at the bottom of Aleksandar and Dragana’s lovely garden in Surduk. Dragana cooked us risotto. A rare break from booking.com, I found this place via Serbian-only web site and a YouTube video. Check it out, Pension Dunavsko Gnezdo! 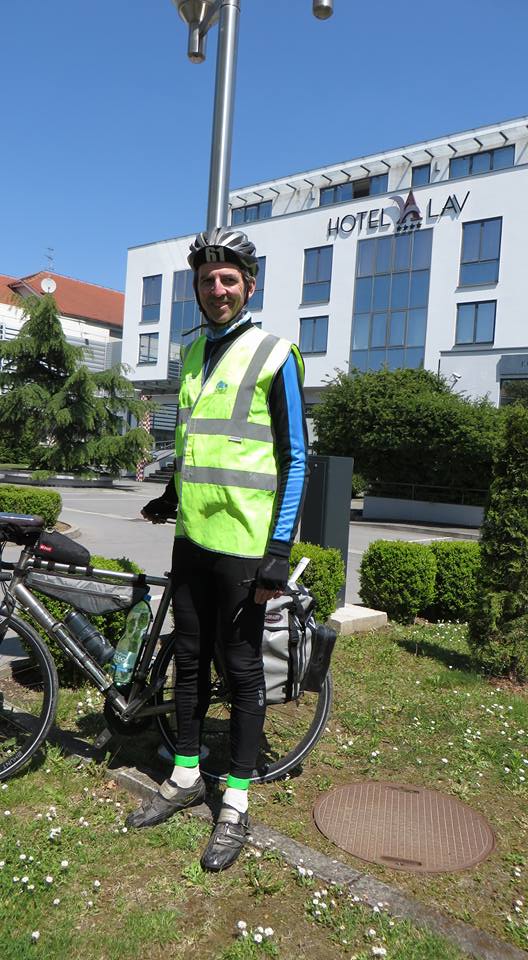 Stayed at Rooms Lišnić in Osijek, run by people who couldn’t have been nicer. Sensing that all the staff looked similar, I asked Ivan if it is a family business. “Yes, you saw my brother last night, and my father gave you breakfast”. Right on cue another elderly gent walked in through the gate. “And here is my 90 year old grandfather who started the business”.

Onward, to Vukovar, where I presented myself at Hotel Lav for a TCR03 / CP3 stamp in my brevet card, but the checkpoint volunteers had left 22 months ago, so I had to self-validate with a photograph!

Croatian Highways agency seem to have bought a job lot of 8% gradient signs, so the flattish road high above the Danube was interspersed with steep dips into and out of every village along the way. Always 8%. 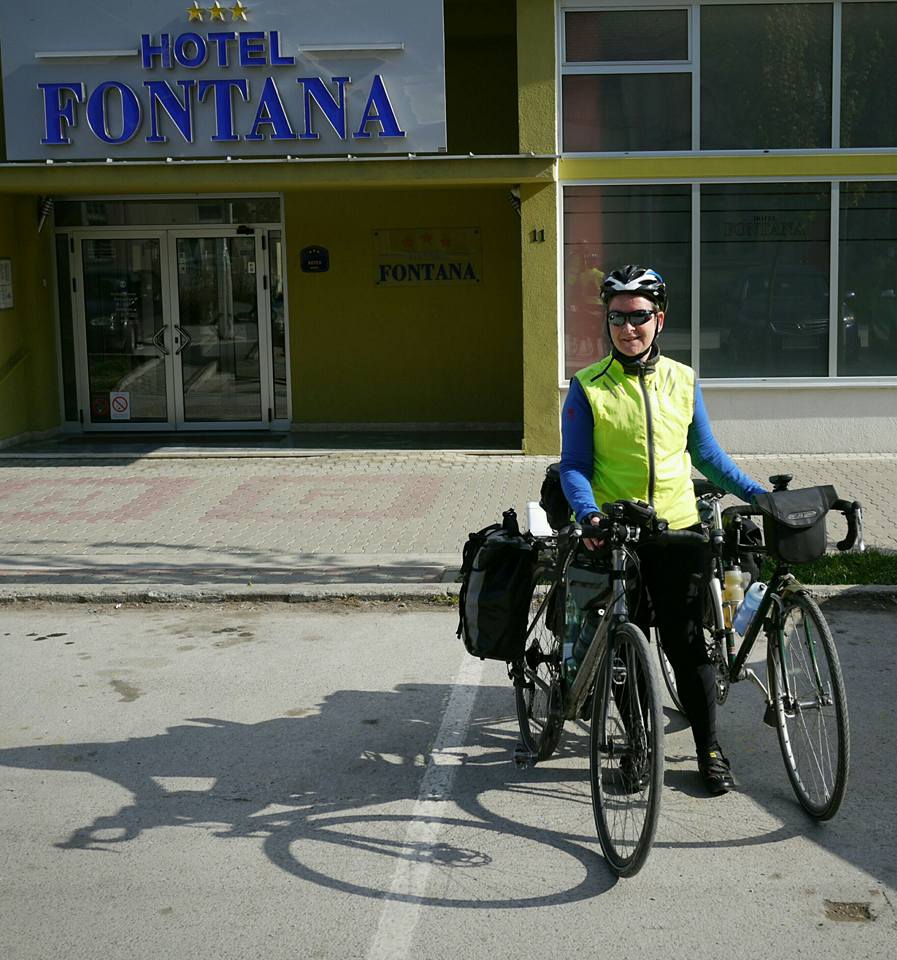 And finally, across the river and into Serbia. Ivan Lišnić seemed a bit scornful when I told him our next stop was Backa Palanka in Serbia. There has been peace for twenty years but enmities are not forgotten. Still, we found more delightful people here. Woman running the Dunav Čarda restaurant: “Here is menu but you can’t read it. So. You want meat or you want fish? Fish with bones or no bones? With bones is better because river fish. I tell you what people eat here. A lot!” We had the traditional thick fish stew/soup flavoured with tons of paprika, together with noodles and lots of nice bread. 4 large beers. Total price £8. 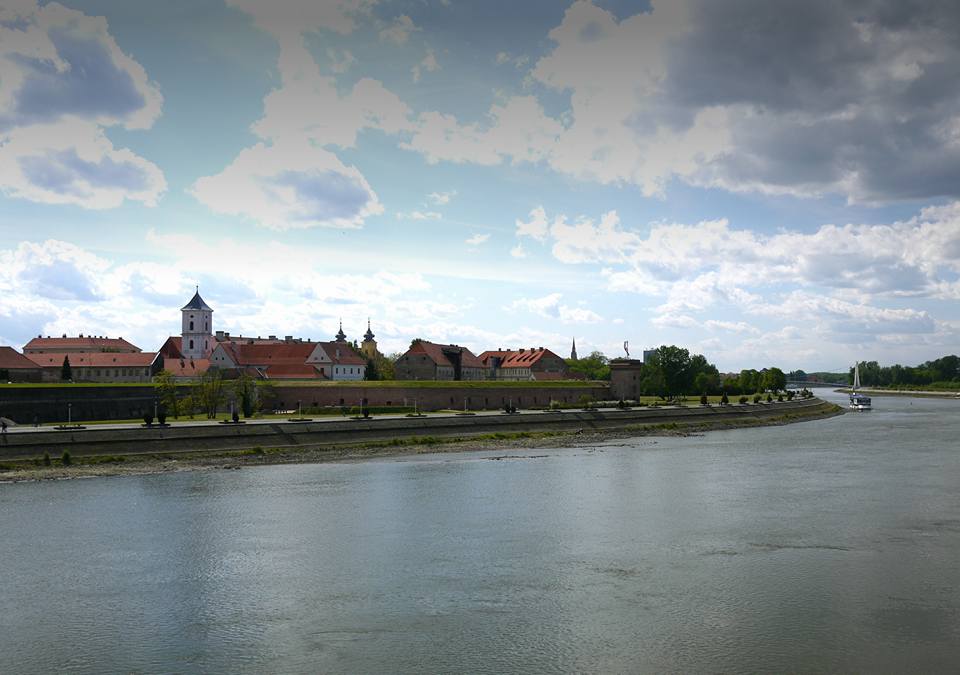 Thanks to OSM, we targeted Penny Market, the only supermarket open in Mohacs on Sunday morning. Stocked up on bread, cheese and fruit for lunch. Heading out of town, past the battlefield, fantastic views of a male harrier, maybe Pallid or Hen. Got video but not able to view it until we get home.

Soon reached the Croatian border, where Caroline sped off, leaving me and Evgeny alone for the obligatory border photo.
After Drava, a hill! First we’ve had on this trip; today’s elevation metres reached 3 figures! One of us was chasing Rose Mcgovern’s Strava times ?

Smooth, quiet roads and, as the route slowly turns from south to east, we picked up a strong tailwind and made good speed into Osijec, looking lovely across the river Drava. 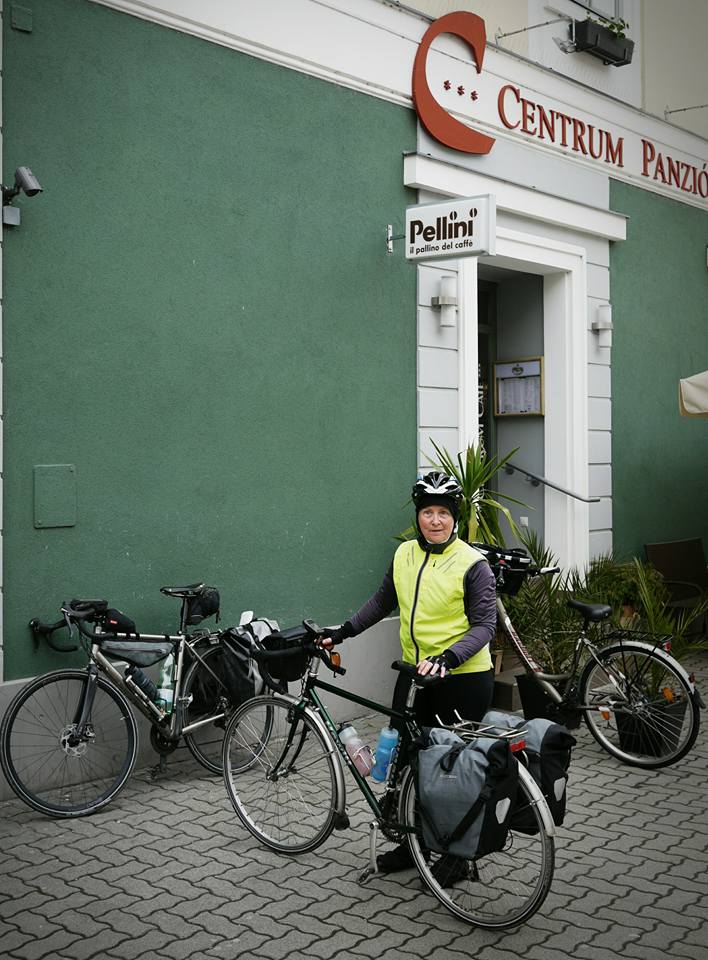 Now in Mohacs, site of the historic battle of 1526. The Ottoman, Suleiman the Magnificent, took on Hungarian King Dobře, whose name translates as ‘quite good’ or ‘OK’. You can guess the result. Especially when you add that the Hungarians forgot to bring any food to the battle. A schoolboy error no long-distance cyclist would ever make.

Nice breakfast this morning at the Pilvax Hotel; we even had a taster menu of small treacly hot drinks while we decoded the DIY coffee machine. Turns out you need to press ‘Cu. Nél.’ as well as ‘Hosszú kávé’ (no sugar / long coffee).

Today’s route was nearly all along raised flood dykes that follow the Danube. Some long stretches of gruelling gravel and then, just when it seemed it would go on all day, someone comes along with a lovely grant from the EU and lays perfect tarmac on it.

Spotted a pair of Black Woodpecker in the trees between bike track and river.

Lunch at a ‘Gastro Pub’ in Baja, which even had the food on breadboards down pat. #hipsterhungary. Nice Paprika fish noodle soup, C had breaded fish with red onion marmalade. Sorry, no photos! 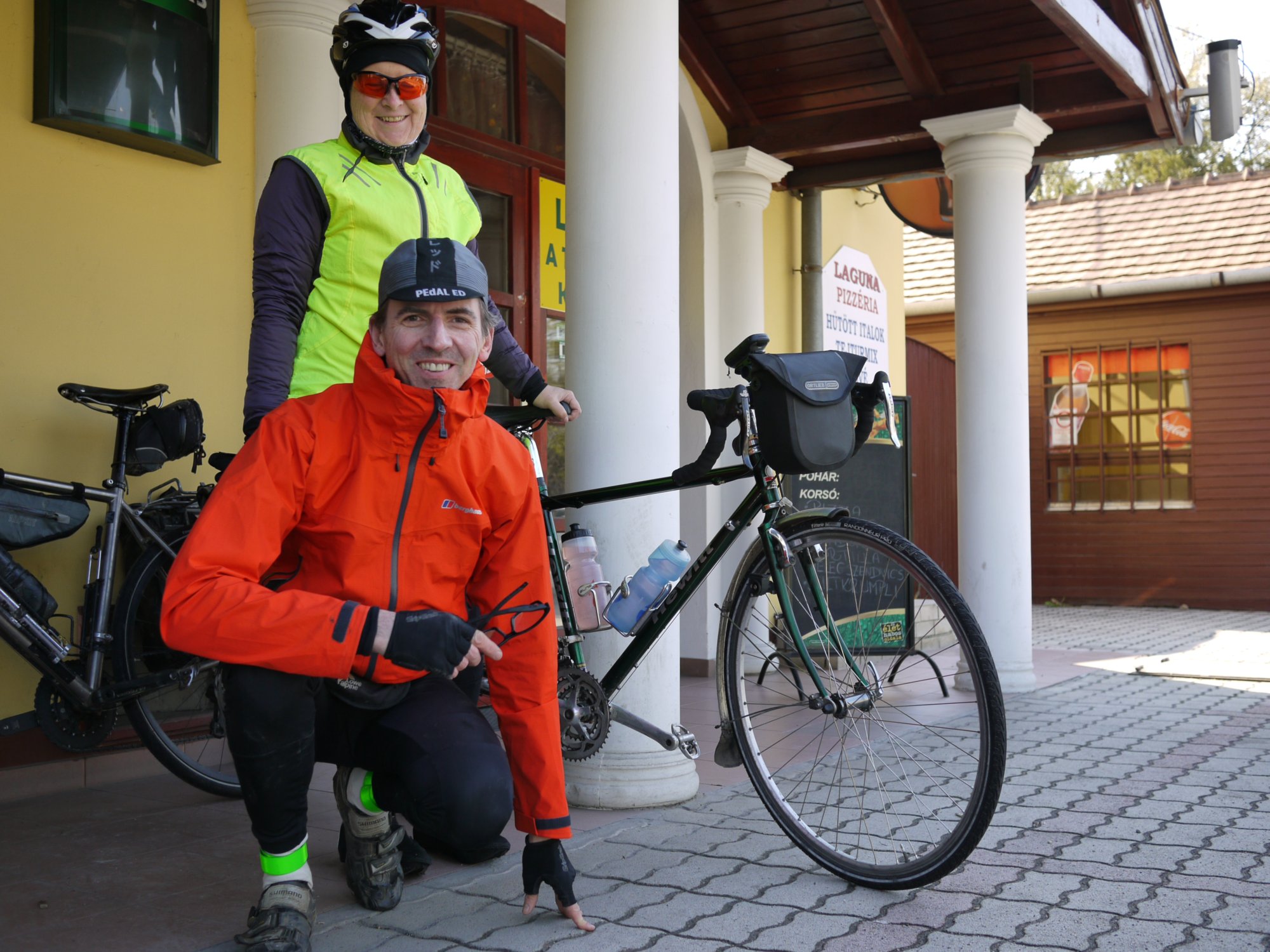 Sunshine all the way today, though still chilly in the morning. Caught the sights of Ráckeve, including fine town hall and monuments to 1956 and 1914-18 war. Followed a rough gravel track along the river’s edge looking at waterbirds. Thought about Mike. Later, after a worrying section of highway, we were treated to pristine cycle path with tailwind. Lunch at the Sport Café in Solt was nice. Easy miles after lunch and arrived at Kalocsa and it’s a gem. Twin-towered Cathedral (1735) and the elegant narrow spire of Saint István’s church. This is the heart of paprika-growing country, and there’s even a paprika museum. Not sure we’ll get to it in opening hours though. Fab hotel, splashing out 50 Euros a night but it’s luxury! 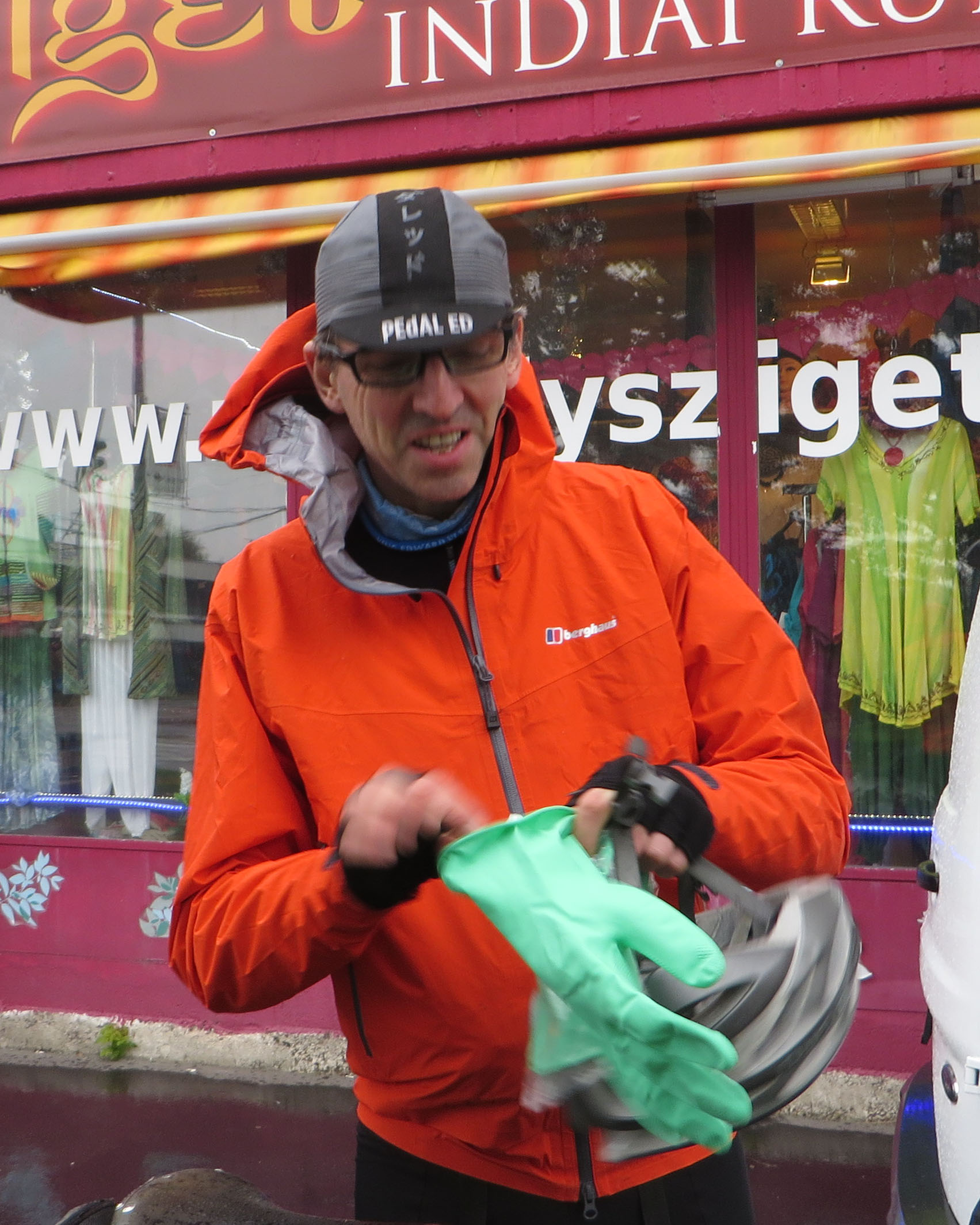 After six trains and two connecting bike rides, we finally arrive in Budapest. Leaving the last train, I lost a glove; not good when the forecast is 4° with “Ice Pellets”. Never fear, Super Diskount provided a pair of Marigolds which kept fingers from freezing. A half-day ride in heavy rain, but no ice pellets. Some rough stuff but no punctures, and good waterproof gear saved the day. Nice dinner at Pizzeria Cadron in Ráckeve.