Yesterday I took a trip to the Gallipoli beach where my grandfather landed 101 years ago, in one of the most futile missions of WW1.

I had little appetite to cycle, but it turned out to be a beautiful ride. From Kilitbayir the road curves around bays of blue-green sea, then turns inland through a landscape of olive and pine trees and scrubby, herby ground cover. I enjoyed the absence of 5 or 6 kg of luggage and felt that tremendous tailwind at my back.

I stopped at Namazgah, where a small museum has been established in a castle / artillery battery. Looking across the narrow straits of the Dardanelles between here and Çanakkale, you appreciate the importance of control of this passage into the Black Sea and with it access to Russia, Ukraine and the middle east. The allies intended to inflict decisive damage on Turkish defences with a naval attack in March 1915, but the mission was the worst-kept secret, the Turks were prepared with artillery and mines, and allied ships suffered heavy losses. The museum gave a flavour of the ‘rightness’ of Ottoman control of this waterway, which had historically been seized by Greek, Persian and Macedonian invaders, and so nearly lost to Russia in the Crimean war.

Continuing on to Seddülbahir I reached the area of V beach, where my grandfather and namesake Robert Jordan was disgorged on April 25th 1915, from a converted, armoured coal barge, the River Clyde, along with around 1000 troops of Munster, Dublin and Hampshire regiments. In that hail of bullets some 600 were immediately killed. Bob Jordan somehow survived, we know not how.

There was a big restoration project going on at V Beach with “No entry, no photos” signs. I thought it was going to be a futile visit, but I made a fuss, showed my photo of Grandpa Jordan to the man on the gate (who spoke no English) and told him I had cycled from England to see this. He shrugged and said “no way” but I just hung around and he phoned a few people and eventually an archeologist, Matt, who spoke some English came out and said he would take me around due to my special situation. Matt was quite interested in my story, and showed me some finds and photos.

As it turned out, the area under restoration was the Turkish fort overlooking the landing beach. The beach itself is free to access. But still I’m glad a made a fuss because it was very interesting to see the beach from the perspective of the Turkish defenders, as well as the landing invaders. There is a couple of years work to complete this restoration, it will be a fascinating visit when finished.

Moving on to the beach itself, I saw the small spit of rocks at the end of which the River Clyde beached, leaving the troops 20 or 30 metres of water to wade or swim across, fully laden with packs and under fire. Those who made it to the shore had the benefit of a small sandbank, no more than 1 metre high, for cover. There they waited for darkness and regrouped for further advance.

There were advances and small gains over the next few months, but no breakthrough, and ultimately the Allies evacuated (ironically the evacuation was considered a masterpiece of military planning and execution, unlike the invasion).

I was lucky to grow up with three living grandparents; Bob Jordan was the one I never knew, as he died in his fifties shortly after the end of WW2. Sitting on that beach in the Turkish sun, I felt some kind of connection to that young man, sent fearful into a foreign land by reckless politicians and generals. 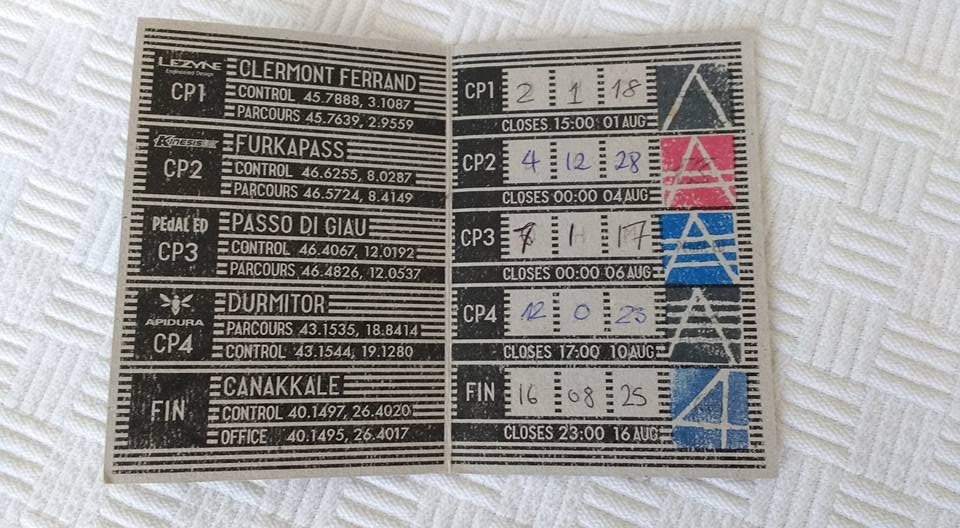 First of all the bum is much better; thanks for asking. Soreness / chafing goes away after about 5 days, battered / bruised feeling never goes away but that’s life!

As you may have seen I finished the race yesterday in 16 days 8 hours 25 minutes. I think finishing position was 90th across the line (70th solo rider). That’s 90th of a starting lineup of 216 including pairs and solos. I’m pretty happy with that! My total distance turned out to be 3,797km and about 51,000m of climbing.

The Alpine climbs were incredible and plenty of time to enjoy them as typical speed on a steep climb is 8km/hr, so for instance Furka Pass (2400m) took about 5 hours of constant effort. And that was one of 6 big climbs in the Alps alone.

You might have seen the video of me arriving at CP3 in Dolomites. That was the end of a fantastic day of last big Alp (Ofenpass) before breakfast, huge descent into Italy and along beautiful river through orchards before climbing again to 2000m through San Pellegrino pass to reach CP3 at eleven in the evening, having covered 255 mountainous km.

Another long descent from Italy to Croatia where I had ‘meltdown Sunday’. Very minor bike crash left me with a bit of equipment damage but seemed to also knock confidence and the house of cards teetered and I almost quit. My saviour Caroline Maynard ordered me to find hotel and rest. Normal service next day.

Into Balkans for more huge climbs in Montenegro and fascinating diverse ways of life in Bosnia, Kosovo and Macedonia. Definitely a region to go back and explore at leisure.

Greece was predictably baking hot and to be endured not enjoyed (I tried but failed to find my fave Greek dishes of Briam or Imam) but when I passed the Turkish border I had a surge of ecstatic energy and rode almost 24 hours straight (360km) to the finish line. I never felt tired until the last 10km and then I never felt so tired in my whole life. 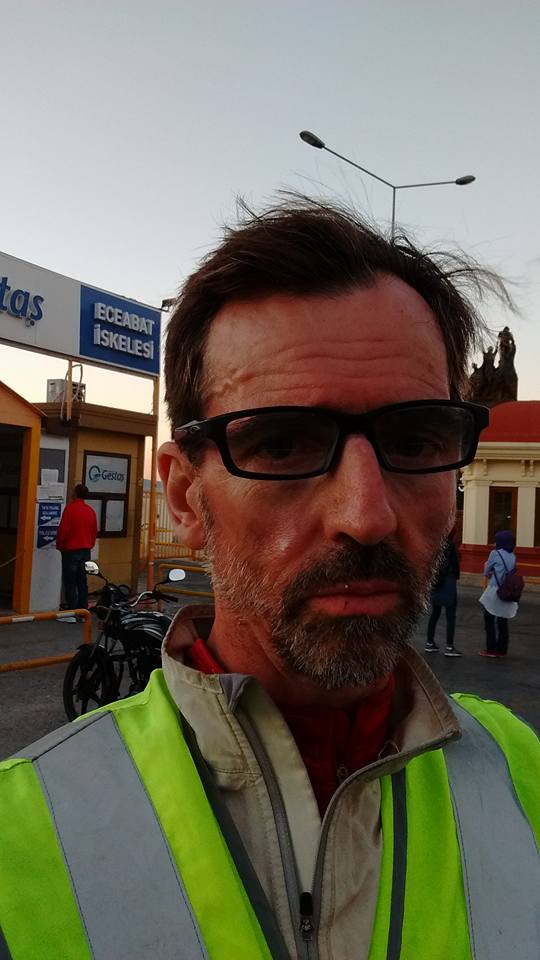 The photo is me at Eceabat ferry terminal about to get boat to Çanakkale for the last 100 meters to the finish line. Maximum tiredness and dishevelment, I hadn’t slept in a bed for 72 hours and 930km of cycling. Amazingly I forgot to take picture at actual finish!

Now enjoying a little holiday in Çanakkale, some riders left already, others relaxing, some more arriving at finish. I’ll be going to Gallipoli beach tomorrow where my grandad landed 101 years ago.

Thanks so much to friends who gave encouragement along the way on FB, Twitter, Strava, email. It all helped motivate me for another day in the saddle.

I’m thinking of doing a show and tell about my TCR experience, somewhere near Winchester one evening maybe in a month or so. Would that be of interest? (I know you are a far-flung lot so maybe not practical for FB friends).