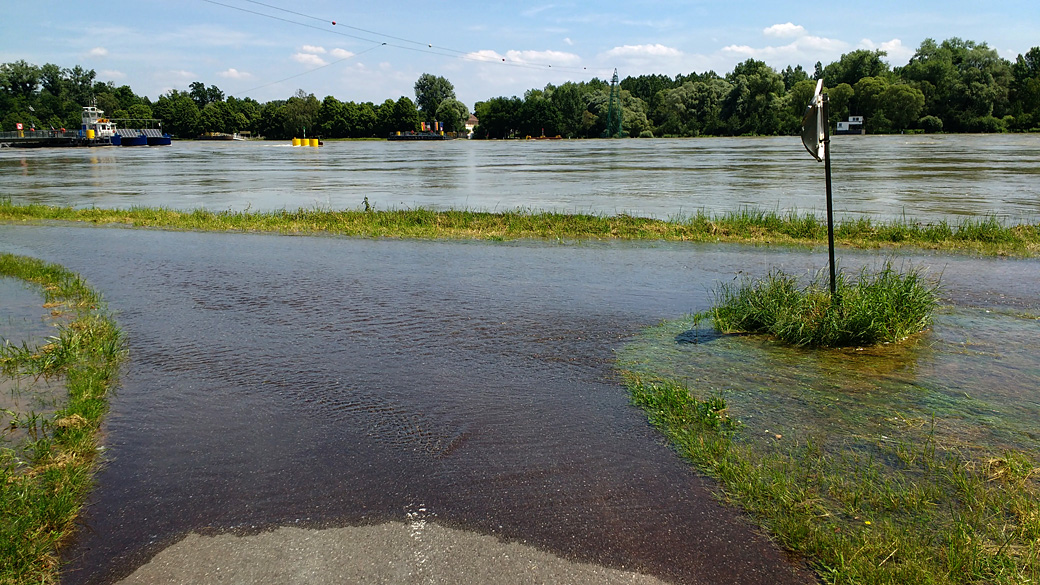 The wetlands of the Sauer delta. And wetlands means floods, floods mean diversions, diversions mean mosquito-infested forests and mosquitoes mean Caroline goes berserk. Seriously, she attracts them like nobody’s business and the bites swell up like golf balls. She emerged from this forest yelling “do that hitting thing, they are all over my back!” They weren’t but only when we pedalled on did I spot one latched on to a buttock and tried bike-jousting but couldn’t reach it. Eventually we outpaced them and reached a sunny place of safety and applied the only vaguely suitable treatment; ibuprofen gel. It works surprisingly well!

The more welcome aspects of delta wildlife are the water birds. We saw numerous storks. There are said to be 160 breeding pairs of heron though we only saw one, so that leaves 319 unaccounted-for. Perhaps busy breeding.

There were numerous German cyclists buzzing through the area (some quite literally because electric bikes are very popular). They all greeted us in German which is a bit odd given this was supposed to be France. Although the loudest and most talkative yelled a string of German that, in hindsight probably meant “get out of my way, I have to leave this forest before the insects eat me alive!” But in contrast to Herr Angry German, a kindly group of six German cyclists guided us on a 10 km diversion to the bridge across the Rhine at Maximiliansau, after our planned ferry was put out of action by floods. Our new friends, living on the quiet and rural west bank of the Rhine clearly thought we were mad crossing to busy industrial Karlsruhe but it’s been interesting to be in an ordinary modern city on the first night of Euro 2016. It put the kibosh on our plans for cold supermarket beer (empty shelves) but that led to a couple of nice pints of Hefe at the bieracademy across the street from our hotel.