Our evening in Koblenz included a nice meal but with the most frustratingly slow service! The restaurant was Cafe Miljoo, perhaps not the most promising name at least for English speakers. The waitress was a charming young woman but we sensed she couldn’t hold two ideas in her head at once, and needed a little sit down behind the scenes to recover after each one. It took ages to get menus, to have our order taken, and to get our table cleared. I probably didn’t help matters, trying to force the pace a bit, when asked: “alles war in ordnung?” (was everything all right?) I answered “zitronenkuchen” (lemon cake). After that she decided we were lunatics and brought neither lemon cake nor a bill. I tried so hard to catch her attention I thought my eyes would pop out of their sockets, but she seemed to be suffering from tunnel vision. 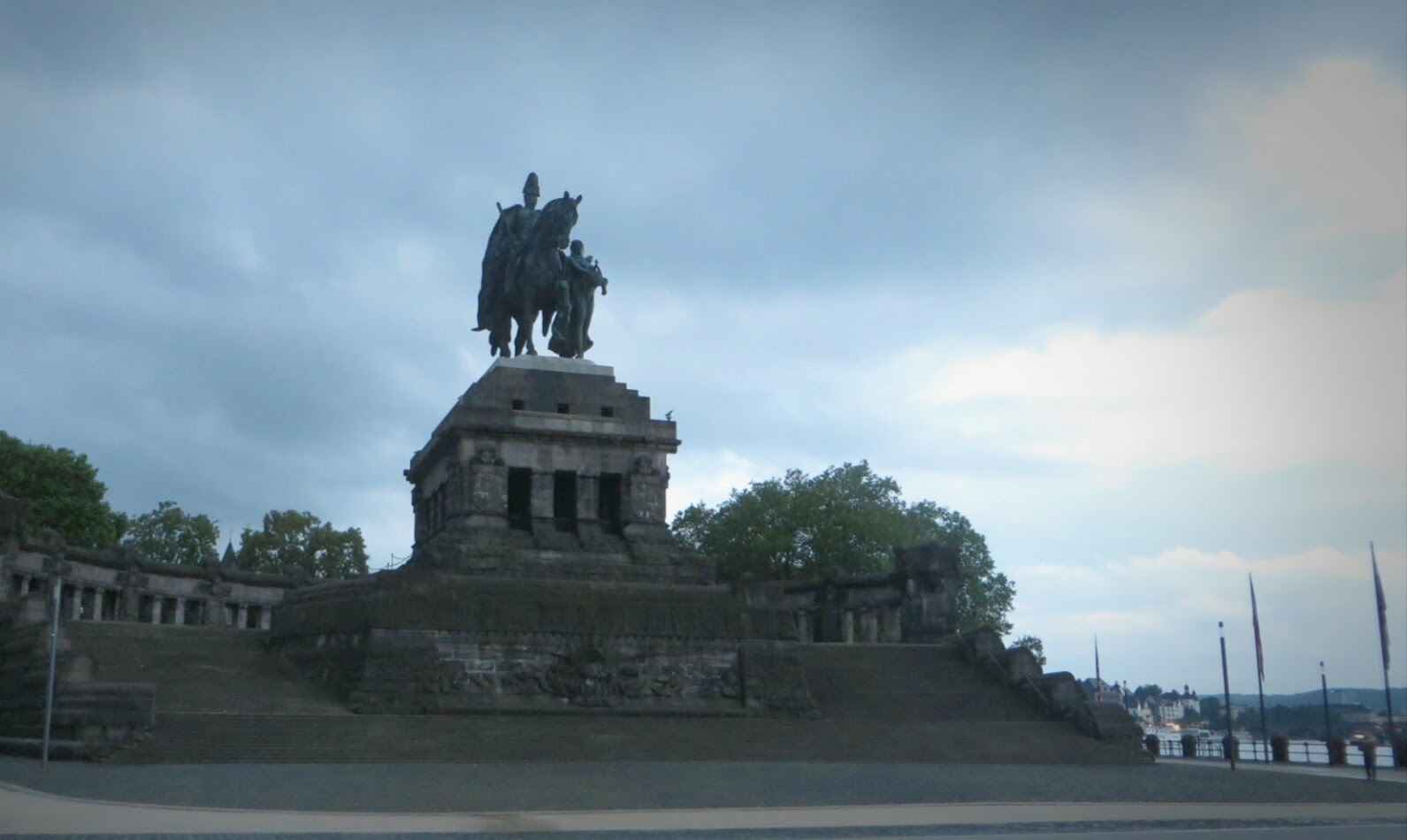 Koblenz is at the junction of Rhine and Moselle (a junction guarded by a colossal and unattractive equestrian statue of Kaiser Wilhelm), so it receives many cruise boats. As we strolled past one, an entertainer was playing the organ, while thrusting his hips rhythmically and suggestively. Meanwhile, the audience were raising and lowering their arms in time, Mexican wave style. Each to their own.

The ride to Köln was a bit of a faff. Flooding has increased with all the recent rain so we were dodging closures. A German man heading in the opposite direction asked Caroline for intelligence about the state of the path, while his wife sat on a bench, arms folded, as if to say “I’m not going another metre on this stupid bike track.” When C confirmed the next bit was open he dog-whistled his wife to come along. Maybe the flood wasn’t their only problem.

We pointlessly crossed the river by ferry twice, wasting time and money, because our guide book recommends an overnight stay on the other side for those moving at half our speed. We should have spotted that in planning, schoolboy error. The final approach to Köln is industrial and busy, and another German cyclist pedalled in the opposite direction yelling something to me and the only word I could make out was “Autofähre” (car ferry). Maybe it was: “Haha you are the crazy pair who pointlessly crossed the Rhine twice by car ferry!”

But the final arrival was splendid, the Rhine is straddled in Köln by numerous huge and spectacular bridges, and with kids on the waterfront skate-boarding to hip hop, one could be in New York. We have a day off tomorrow, bye for now.