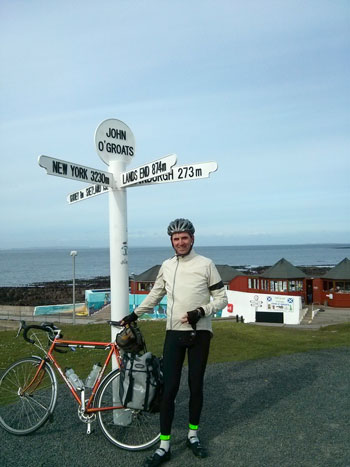 Leaving the slightly posh Bettyhill hotel, there were some long hills to climb and then descend, among sheep farms in a still-rugged landscape. But from Reay (site of the Dounreay nuclear power plant) suddenly it was gently undulating, arable farms, more populated. After lunch in the giant metropolis of Thurso, C had had enough and pedaled the last 10 wind-assisted miles to our final mainland B&B in Mey.

Meanwhile I went off bagging landmarks on an increasingly brilliant sunny afternoon.

The sublime: Dunnet Head, mainland Britain’s most northerly point, a beautiful and inspiring uphill ride to 360 degree viewpoint across Hoy and Orkney to the north, and the rest of Britain to the south. The ridiculous: John O’Groats, self-appointed end of the road, with no particular geographical claim; just a giant coach park surrounded by souvenir shops.

A Welsh cyclist took my photo under the JOG sign. At first I thought he said he was cycling the Holocaust; pretty weird I thought, but there are Commonwealth war graves nearby, I guess associated with Scapa Flow. But then I realised he was cycling “the whole coast”, clockwise from Pembrokeshire.