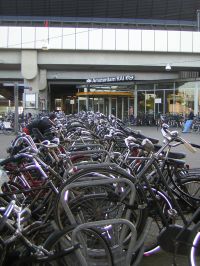 In Amsterdam, everybody rides a bicycle. They don’t make a big thing of it. You won’t see anybody racing by in shiny lycra, or even wearing a helmet. The bikes are all similar – large and heavy, with high handlebars, luggage racks and dynamo lighting. The riders come in various ages, sizes, and genders, but they all proceed at a uniform pace of around 10 mph, often chatting in small groups.

I liked Frank Lee’s photos of bikes in Amsterdam.

Amsterdam streets have separate bike lanes, and there’s a special bike lane phase at traffic lights. You can take your bike on the train, too. If you go by public transport in Amsterdam, a single ticket will allow you to travel from A to B by any combination of bus, tram and metro. John Prescott, eat your heart out!