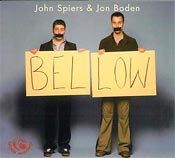 Last Friday, the Tower Arts Centre treated us to a concert by the wonderful John Spiers and Jon Boden. This excellent booking was allegedly achieved through Boden calling John Tellett a bastard in Folk on Tap for not having booked them previously, despite Boden being a native son of Winchester, a stratagem clearly worth repeating.

Several times, Boden acknowledged his debt to the campfire singing of a “mysterious underground camping organisation” (how do you camp underground exactly’) called Forest School Camps. One of the songs he learnt there was Prickle Eye Bush, recognisable to the more mature members of the audience as Gallows Pole from Led Zeppelin III. (One of my earliest albums – the original gatefold sleeve with the rotating paper disc with weird little pictures on it.) Not having the benefit of the FSC, Zep had come to the song via Leadbelly and John and Alan Lomax, and perhaps didn’t even know of its English origins. 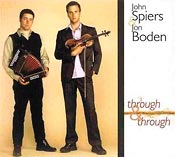 Courting Too Slow could have been a letter from a timid software developer to a modern agony aunt, and brought out the Maynard school of counselling: just pull yourself together.

The packed Tower audience immediately warmed to the performers’ energy, and sung quite audibly. Tom, who had been dragged under protest to a boring old folk gig, and apparently had his suspicions confirmed by his first sight of the audience, was particularly enthusiastic (“why didn’t you tell me they were like this'”). And it was good to see some old friends again and come out as unapologetic folkies.

Finally, John Tellett please note, Spiers is a homonym for Spires, not for Spears.