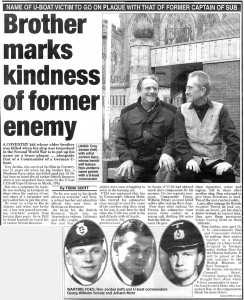 A story about Rob’s Dad…

A Coventry kid whose elder brother was killed when his ship was torpedoed in the Second World War is to put up his name on a brass plaque … alongside that of a Commander of a German U-boat.

Tony Jordan, who survived the Blitz in Coventry, was 11 years old when his big brother Ron, a Merchant Navy sailor, was killed aged just 19. He had been on board the oil tanker British Resource when it was torpedoed three times by the U-boat U124 off Cape Hatteras in March, 1942.